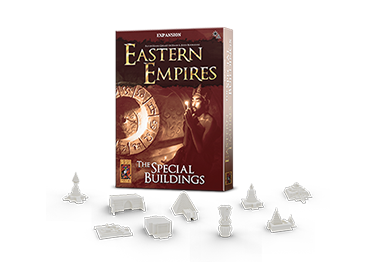 Eastern Empires is a board game for 5 to 9 players that covers the development of ancient civilizations over 8000 years of history. This is not a wargame, rather the players lead their civilizations as they expand, develop culture and technology, engage in conflict, apply diplomacy and face calamities. The objective of the game is to gain the most victory points, which represent the level of advancement of a civilization and thus the glory of their ruler. This game provides a full day of fun for players who are dedicated to epic board games with a strong historical context. Due to the large diversity in advances that can be developed and balanced differences in playing conditions between the civilizations, each new game played is very different from the previous one! This is a standalone game that can be played by 5-9 players and can be combined with ‘Western Empires’ to complete ‘Mega Empires’, a game for 5-18 players. A full game of Eastern Empires takes up to 13 hours. However, this box also contains a tutorial scenario which lasts around 2 hours and a 6 hour ‘short game’ scenario.

The Special Buildings Expansion adds new special rules to a game of Eastern Empires. This box contains a special rule booklet and 9 monochrome plastic miniature buildings, 1 for each playable civilization.

This combo package comes with the Eastern Empires Special Buildings Expansion which contains 9 unique miniature buildings in total, 1 for each playable civilization. During the game players may choose to construct a special building which grants specific benefits and victory points.

It is recommended to use this expansion only once you are familiar with the basic game.

This expansion is also compatible with a 5-9 player game of Mega Civilization .

Contains:
1 box of the Eastern Empires Special Buildings Expansion, including:
-9 unique miniature buildings, 1 for each playable civilization in Western Empires
-special rules for the expansion and historical background information for each building.

There are no reviews yet.

Only logged in customers who have purchased this product may leave a review.